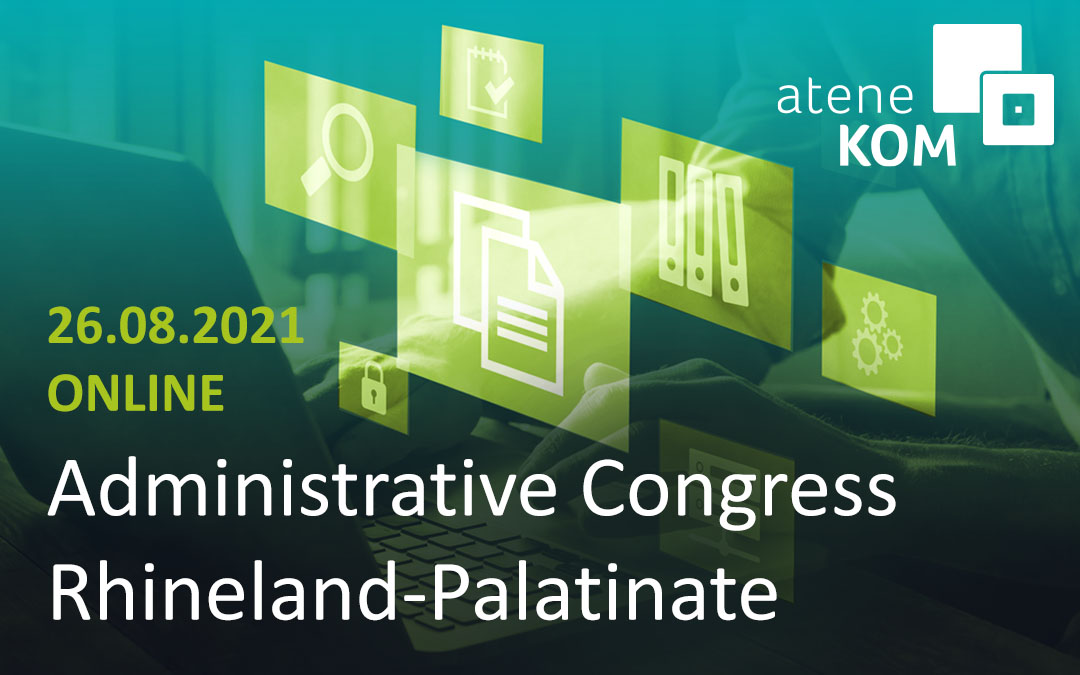 How digital is the administration of the German state of Rhineland-Palatinate? This question will be addressed by experts from politics, science and business  in the context of the “Digital Administration Rhineland-Palatinate” on 26th of August 2021. atene KOM is currently developing the data information portal for the State Government. It will be presented by Managing Director Tim Brauckmüller at the virtual congress of “Behörden Spiegel”.

The digital transformation in public administration is a mammoth task. The State Government in Mainz has therefore developed its own strategy, the “Digital Administration Rhineland-Palatinate”. The online congress of the same name, organised by “Behörden Spiegel”, will on the one hand put emphasis  on the current status quo: Where does the state stand with regard to the implementation of the Online Access Act, which requires hundreds of government services to be available online for citizens by next year? What impact has the Corona pandemic had on the working methods and working environment in the offices and administrations? On the other hand, the agenda will state future-related issues : How can the broadband expansion necessary for digitalisation be sensibly controlled and implemented? And: To what extend  did the destruction caused by the devastating flood in July of this year  leave its mark   in the digital infrastructure? How can the damage be assessed and repaired as quickly as possible?

Particularly with regard to answering the mentioned infrastructure questions, the Data Information Portal Rhineland-Palatinate (DIP RLP), which is currently under construction, can make an important contribution. The geoinformation tool is currently being developed at atene KOM and will be presented byManaging Director Tim Brauckmüller at the Infrastructure II Expert Forum starting at 2 pm.

Current aerial photos show the extent of destruction after the floods

Based on geo-referenced maps, the DIP shows the current status of broadband expansion in Rhineland-Palatinate, current detailed network plans and existing infrastructures. This allows  responsible officials in the administration departmentto create synergies at various planning levels: Broadband expansion as the basis for  the digital transformation becomes more efficient and more targeted. Fundamental indicators are socio-economic drivers, such as population, traffic, economy or topography. Integrated monitoring makes it possible to evaluate data quickly and at a higher level.

Just how helpful a digital tool like the DIP can be, can be demonstrated  by means of  the current situation after the flood disaster, which cost many lives in mid-July and caused major destruction of roads, railways, supply lines and other infrastructure: With the help of current aerial photographs, the extent of the disaster in the flooded areas can be shown in detail.

Geoinformation is the basis for diverse planning processes in broadband expansion, infrastructure development, intelligent mobility offers and much more.

All information about the event can be found here: www.dv-rlp.de