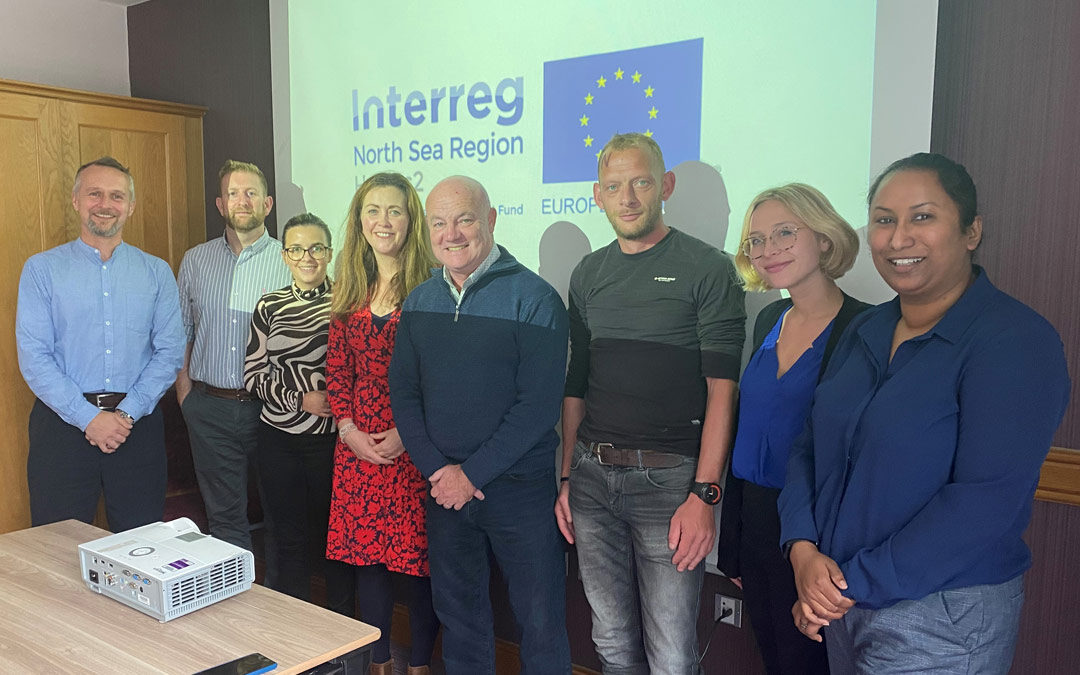 The HyTrEc2 partnership in September 2022 in Milton Keynes, UK

As a part of the project goal to investigate and enable hydrogen supply chain and training, atene KOM has worked alongside the Arctic University of Norway (UiT) in Tromsø, Norway to jointly develop the new HyTrEc2 Training Modules (based on the HyTrEc2 Skills Framework Report published by atene KOM in 2021). These HyTrEc2 training modules are to be piloted this October 2022 at North East Scotland College (NESCol) in Aberdeen, which is currently being organised by atene KOM, Aberdeen City Council and NESCol. Additionally, atene KOM is discussing the opportunity to trial these training modules in other regions of the North Sea Region to demonstrate the transnationality and scalability of this significant HyTrEc2 project outcome.

Furthermore, in recent news, atene KOM has developed a comprehensive report on hydrogen production and distribution in remote areas in the NSR, which is now in the final stages of partner review. This report, alongside other highly anticipated outcomes of the project – such as the concept and feasibility study for hydrogen applications in harbour settings overseen by RISE Sweden, or the Business Case and Economic Modelling for Green Hydrogen Production report (RISE) – are expected to be published and made freely available online by the HyTrEc2 partnership within the coming months.

HyTrEc2 project results and their future usability, including monitoring data on the reduction in CO2 emissions of various hydrogen vehicles, will continued to be disseminated at high-level national and European events, such as the Winds Meets Gas Symposium 2022 (6-7 October 2022, Groningen), the NESCol HyTrEc2 “Road to Decarbonisation” pilot trainings (6-7 October, Aberdeen), the North Sea Conference 2023, and so on. During the ongoing final year of the project, the partnership aims to ensure HyTrEc2 continues to receive European-level exposure to further build capacity of the project, speeding off – by hydrogen-powered vehicles, of course – into the bright horizons on the road to decarbonisation.

For more information about transnational hydrogen developments and research across our partner regions, check out the HyTrEc2 project website: www.northsearegion.eu/hytrec2

You can also join the partners on their hydrogen journey by following the HyTrEc2 project on social media:
Twitter: https://twitter.com/HyTrEc2
LinkedIn: https://www.linkedin.com/in/hytrec2-interreg-nsr-322958194

The main objective of the HyTrEc2 project is to create conditions under which the hydrogen Fuel Cell Electric Vehicles (FCEV) market can develop and the North Sea region can evolve to become a centre of excellence for fuel cells and range extenders.

The project aims to promote the FCEV market; for this purpose, the results from different project components will be developed into a strategy. The project components provide insights into the more cost-effective production and storage of green hydrogen and the cost-efficient use of hydrogen in energy supply and transport. With the implementation of a multitude of local initiatives of the transnational project partners a practical relevance of the elaborated results can be guaranteed.

More information about HyTrEc2 is available on the project website: www.northsearegion.eu/hytrec2.