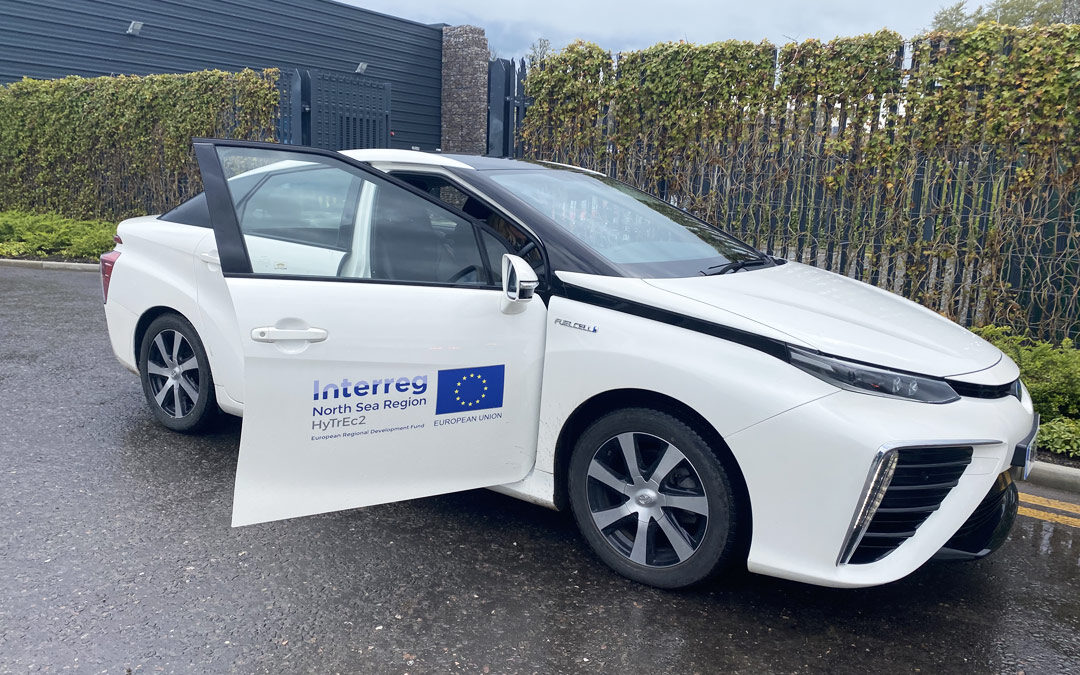 Partners of the Interreg North Sea Region HyTrEc2 project continue their hydrogen journey with exciting updates from all partner regions. Promoting and testing solutions for the production, storage and distribution of green hydrogen and improving the operational efficiency of hydrogen vehicles (e.g. accompanying the launch of Groningen’s new hydrogen boat this summer) are the ambitious goals of the Interreg North Sea Region (NSR) funded project HyTrEc2. The international project consortium will work for a total of seven years on transnational solutions to achieve these goals.

The international Interreg North Sea Region (NSR) HyTrEc2 project consortium is continuing to collaborate on a transnational basis to reach the objectives of the ambitious project, which was launched in 2016 and extends into 2023. Some of these objectives include the further promotion and testing of green hydrogen production, storage and distribution solutions, as well as the improvement of the operational efficiency of hydrogen vehicles (e.g., monitoring the implementation of Groningen’s new hydrogen boat this summer).

Tasks include buildings and expanding pilot partners’ knowledge in the field of green hydrogen (GH2) and as well as the development of a common strategy and initiatives across the NSR that support the further use of Hydrogen Fuel Cell Electric Vehicles (FCEVs) in the NSR and beyond. To this end, atene KOM has been developing a comprehensive skills framework analysis of the hydrogen sector. The resulting HyTrEc2 Skills Framework Report was published in Autumn 2021 and publicly launched during the HyTrEc2 Digital Series, another initiative overseen by atene KOM. The skills framework report conducted within the scope of HyTrEc2 was produced with the support of operating hydrogen companies and now serves as the basis for the content of the HyTrEc2 Training Modules being jointly developed by atene KOM and University of Tromoso (UiT).

A main finding from skills framework report is that (green) hydrogen can enable decarbonisation across the energy and industrial sectors. This will help the EU to meet its environmental commitments. To fully benefit from these opportunities, the current workforce requires upskilling and retraining especially in production applications, storage, and safe handling of hydrogen. With appropriate technical skills and the right training and accreditation (industry endorsed) programmes, industry is poised to maximise growth opportunities in the green hydrogen value chain that enables an economically sustainable green hydrogen industry. In turn, this will help to address concerns around energy security and supply, providing economic and environmental cohesion.

Further research conducted within the Interreg NSR HyTrEc2 project has led to insightful business case studies (e.g., “Aberdeen Hydrogen Hub”), the HyTrEc2 Hydrogen Transport Legislation and Standards in the NSR Report, and the report on hydrogen production and distribution in isolated areas in the NSR. Such project findings and impact (i.e., monitoring of the reduction in CO2 emissions of hydrogen vehicles both directly and indirectly due to the project) have been disseminated at the high-level annual events of the Winds Meets Gas Symposium, the Cenex-LCV Event and the North Sea Conference 2022. During this ongoing final year of the project, the partnership aims to ensure HyTrEc2 continues to receive European-level exposure to further build capacity of the project.

The HyTrEc2 partnership convenes in Aberdeen, Scotland for the 11th Steering Group and Partner Meeting of the project to draft a clear timeline for the delivery and promotion of all outstanding outputs of the project.

For a quick glimpse into what is going on in our HyTrEc2 partner countries, check out the HyTrEc2 May 2022 Newsbytes: https://northsearegion.eu/media/21194/2022-hytrec-newsbites-a5.pdf

You can also join the partners on their hydrogen journey by following the HyTrEc2 project on social media:

The main objective of the HyTrEc2 project is to create conditions under which the hydrogen Fuel Cell Electric Vehicles (FCEV) market can develop and the North Sea region can evolve to become a centre of excellence for fuel cells and range extenders.

The project aims to promote the FCEV market. For this purpose, the results from different project components will be developed into a strategy. The project components provide insights into the more cost-effective production and storage of green hydrogen and the cost-efficient use of hydrogen in energy supply and transport. With the implementation of a multitude of local initiatives of the transnational project partners a practical relevance of the elaborated results can be guaranteed.

More information about HyTrEc2 is available on the project website: www.northsearegion.eu/hytrec2.