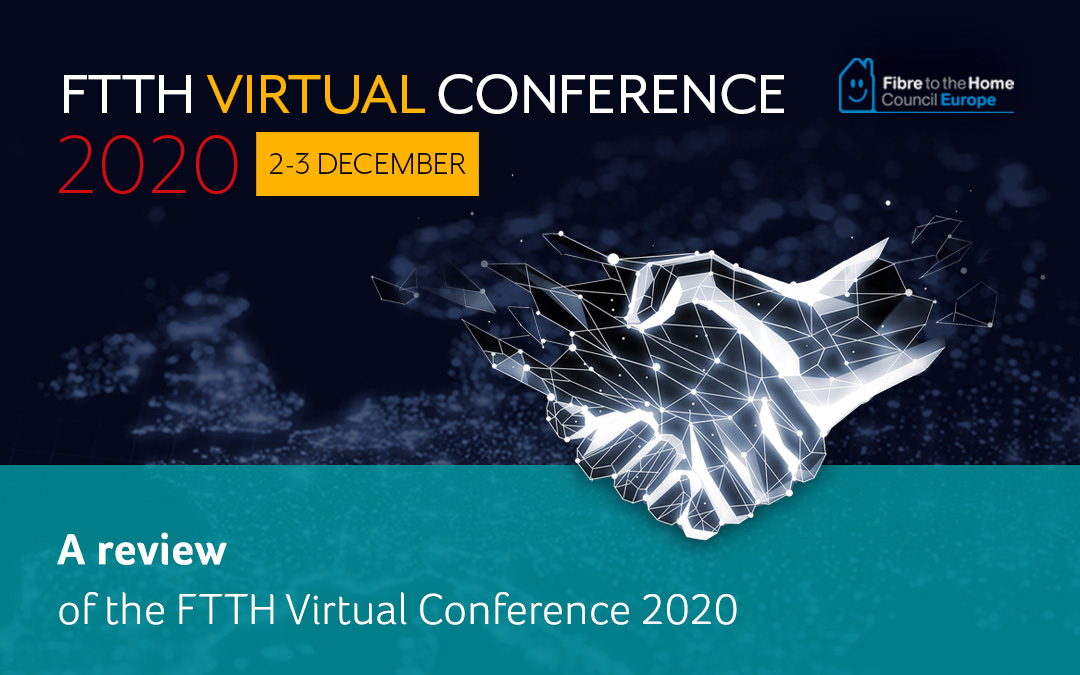 Due to Corona regulations, the FTTH Conference was held fully online – as “FTTH Virtual Conference 2020” – on the 2nd and 3rd of December. As the main supporting partner, atene KOM participated at the world’s largest fibre summit. The leading digitization service provider in Germany, atene KOM, organized for the sixth time the “Governmental Day Workshop” together with the FTTH Council Europe. The workshop took place as one of the first events of the conference on the 2nd of December.

The new virtual format was as a successful alternative to the common face-to-face event and gave the industry the opportunity to come together again this year.

This year’s event once again brought together stakeholders from the fields of technology, regulation, politics and financing to discuss the latest fibre optic technologies and solutions, product innovations, financing options and political approaches. The clear objective is to further accelerate fibre and 5G connectivity in Europe.

More than 150 speakers presented the wide range of FTTH and other fibre optic technology, regulation and service topics. In 19 workshops, 17 panel sessions and a separate networking lounge, visitors of the virtual conference were able to exchange views on the topics of financing, technology and politics.

On the first day of the conference, the Governmental Day Workshop provided an interactive platform for broadband stakeholders in the European Union and for regional initiatives of the Member States. This year’s focus was on the broadband and digitization policy of the EU and its member states as well as the innovations in the Federal Broadband Support Programme.

Peyman Khodabakhsh, Project Manager at atene KOM stated: “It was a completely new experience to host the “Governmental Day Workshop” for the sixth time in a row, this time in a virtual format with a large number of participants. The virtual FTTH conference provided a great opportunity to exchange views on the progress made in all European Member States. All participants agreed on one point: Reliable digital connectivity for all citizens is one of the key factors for our present and future resilience”.

On the second day, the panel “Germany goes Gigabit” took place during the Finance Session. Four knowledgeable experts discussed views and forecasts on how broadband financing will develop in the near future. The panel on financing broadband infrastructure was moderated by atene KOM expert Christian Zieske. The second day of the world’s largest fibre summit began with an opening speech by Dorothee Bär, Minister of State for Digital Affairs. She reaffirmed the importance of the gigabit infrastructure for the economy and society. Access to gigabit networks was a key factor in increasing growth and prosperity in the 2020s, said Bär.

Ms Bär also emphasised that Germany and Europe made a great leap forward regarding digital transformation, which was unprecedented in terms of speed.

Overall, the increasing availability of fibre was reassured in a recently published market forecast of the FTTH Council at this year’s FTTH Conference. In all 27 member states of the European Union (including Great Britain), the number of available FTTB/FTTH connections (“Homes Passed”) is expected to reach 202 million by 2026. According to the FTTH Council’s figures, they were 88 million FTTB/FTTH connections throughout the EU in 2019. In Germany, considerable growth is also expected until 2026: Compared to 2019, the availability of Fibre-To-The-Building (FTTB) or directly to the user (FTTH) is expected to increase by 730 percent, to 34 million connections, according to the FTTH Council Europe’s forecast.

The current corona pandemic is also contributing to this rapid growth, according to the host of the event. Thus, the current situation should be seen as a multiplier that has strengthened the existing trend and demand for fibre. Hence, the public’s perception on the importance of broadband connections is changing permanently.