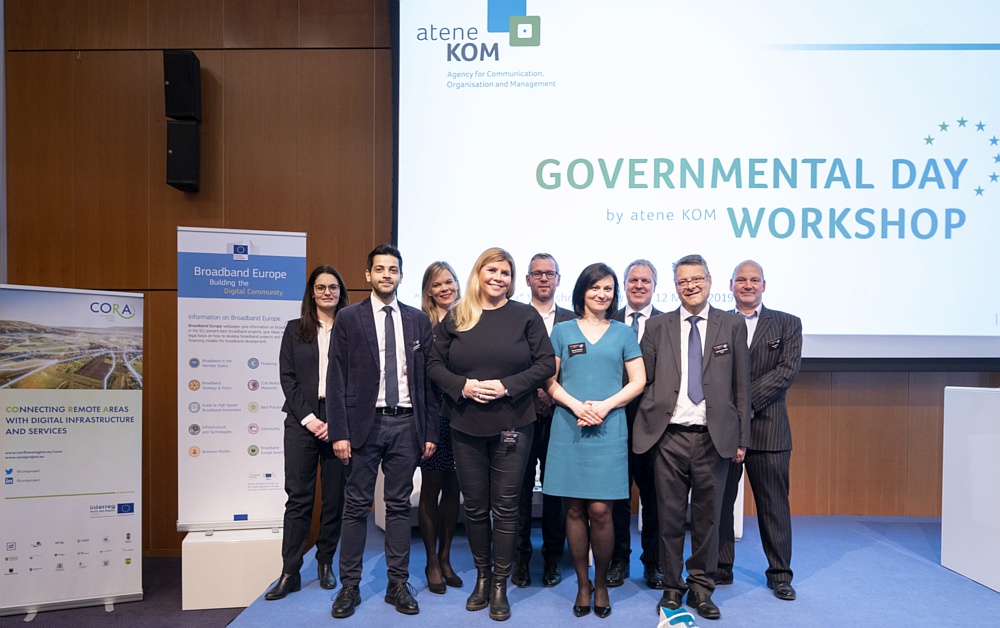 On 12 March 2019 the “Governmental Day” Workshop took place in Amsterdam. Together with the FTTH Council Europe, atene KOM organised the event format for the fifth time. Actors of European broadband policy and representatives of local and regional authorities exchanged ideas and experiences. In particular, the challenges and perspectives of digitalisation in rural areas were discussed. Strategies to reach the gigabit society, EU funding offers, specific local initiatives for broadband expansion and supra-regional projects were in the focus – including the atene KOM project CORA for the promotion of digital infrastructures and services in rural areas. To sum up, citizens must be involved and civic engagement at the local level must be supported in order to master the digital transformation.

Peyman Khodabakhsh (Project Manager CORA, atene KOM) welcomed about 150 participants with an overview of the state of broadband coverage in Europe. He highlighted the challenges for the digital development of rural areas with some figures: For example, 30 percent of the inhabitants of rural regions in Europe have no digital skills at all. At the same time, there is still a discrepancy between network availability and network usage: 60 percent of European households already have fast network access (100 Mbit/s or higher), but only 15 percent actually use it.

She underlined the financial support provided to the broadband sector by the current Multiannual Financial Framework (MFF) and explained in particular the telecoms sector within the Connecting Europe Facility (CEF), which also includes the Connecting Europe Broadband Fund (CEBF) and the WiFi4EU initiative. With the new MFF 2021 to 2027, around EUR 3 billion will be allocated to the CEF DIGITAL funding strand and synergies with transport and energy networks, for example, will be supported to enable digital transformation. Rotileanu was satisfied with the success of the WiFi4EU programme: The vouchers for European municipalities intended for the installation and purchase of WLAN equipment were already exhausted in the first hour after the opening of the first call for funding. The next call is expected in spring 2019. Following the presentation of successful local expansion projects in Wales and Sweden – both among the winners of the European Broadband Awards 2018 – Maija Ahokas from the Finnish Ministry of Transport and Communications explained the importance of digital infrastructure for the future of the economy and society based on the example of Finland. Jorge Infante Gonzalez (Body of European Regulators for Electronic Communications, BEREC) explained how to fine-tune the regulatory framework for electronic communications markets on the basis of different geographical areas and market and competitive conditions. The co-chair of BEREC’s expert group on market and economic analysis explained how an independent, consistent and high quality application of the European regulatory framework can be ensured for the benefit of the European Member States. Christian Zieske (atene KOM) discussed the possibilities of using data for the production of maps and the successful planning of the expansion of digital infrastructure by means of geo-information systems (GIS).

Within the framework of CORA, there is now an e-learning tool that provides local communities and decision-makers with digital infrastructure, digital skills and digital services, their possibilities and implementation.
The interactive final part of the workshop also focused on ideas for involving local actors and citizens. At the three thematic tables on digital infrastructure, digital services and digital competencies, the participants discussed measures that contribute to improving and promoting these dimensions. Conclusion: Increased involvement of stakeholders in rural regions is essential to promote digitisation across the board. Local and regional initiatives must be supported both by national governments and by the European side. In addition to the digital infrastructure, which is the basis of Europe’s future viability, the applications (digital services) and skills (digital competencies) of citizens must also be given greater consideration.

The fifth “Governmental Day” Workshop took place during the FTTH Conference 2019 in Amsterdam. The presentations of the participants as well as further photos are available on the event page.
With 3 000 participants from almost 100 countries, the FTTH Conference is the world’s largest meeting place for broadband players. Industry leaders, experts and decision-makers presented fiber optic technologies on 10 000 sqm and discussed ICT policy and the financing of broadband expansion.